The waves haircut is a popular and trendy way to style a buzz cut. Most guys combine a fade with waves, although there are many different types of waves hairstyles for black men to get. By using a wave brush, durag or cap, and pomade, you can add texture and style to black hair by creating a spiral around the head. Also known as 360 waves or the wave length, these cool haircut styles for black guys can be further enhanced by wolfing, which is not cutting your hair at all to let the kinky curls grow out.

If you’re trying to get waves, here are the best haircuts for waves. Whether you want a high, mid, low, bald, temp, drop fade haircut with waves, these 360 wave hairstyle ideas showcase all the different cuts and styles you can get. You can even add a part on top, hair design on the sides, or full beard for an extra hot, masculine look. 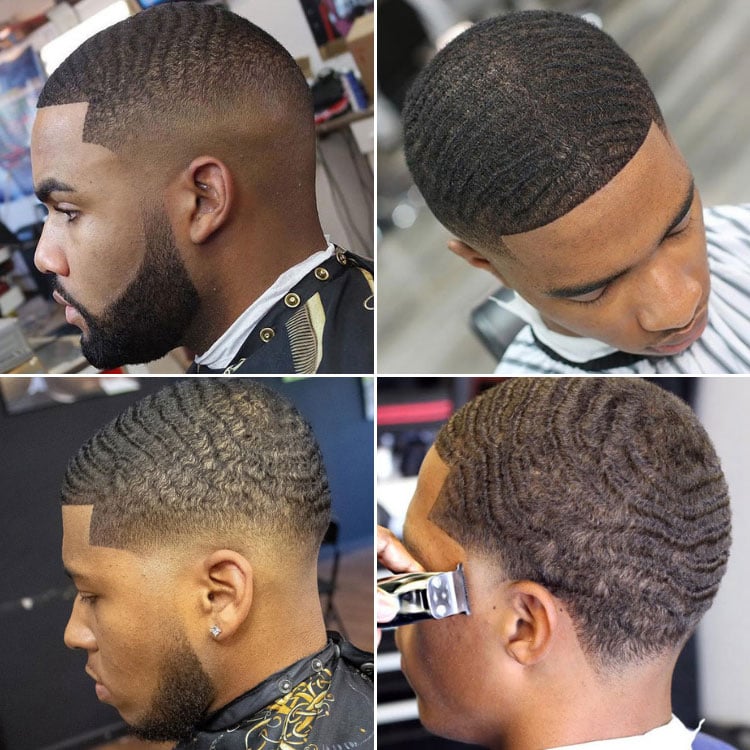 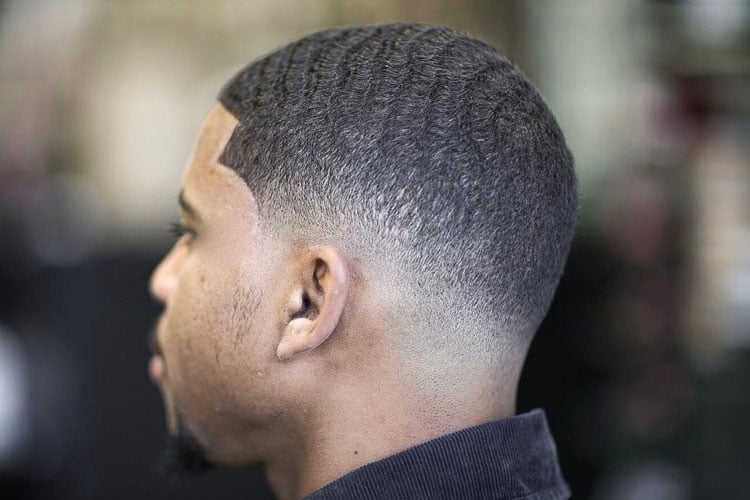 From a temp fade that starts high to a drop fade that tapers down low to the neck, ask your barber which men’s fade is the perfect complement to your style. Here are the best taper fade haircuts with 360 waves to give you ideas for your next visit to the barbershop.

A temp fade with waves results in a clean, fresh look. This temple fade haircut starts high and is highlighted by a line up along the hairline. The short buzz cut on top is starting to show waves. To complete the style, grow a full beard for a masculine finish. Sexy and modern, this temp fade and 360 wave combination will look good on any black man. 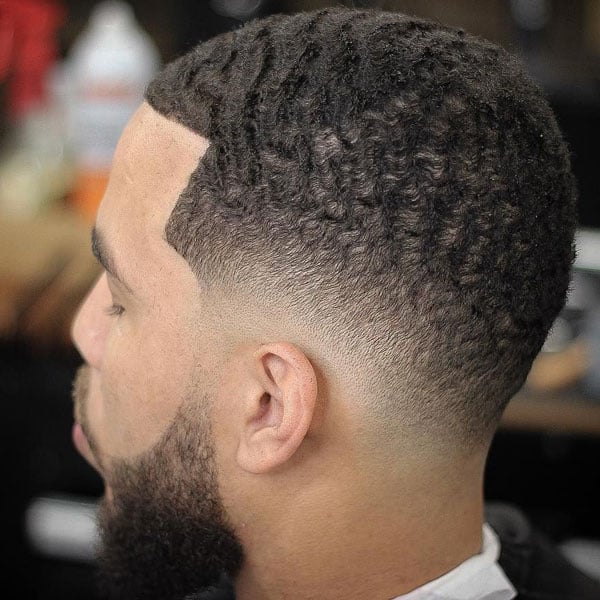 This drop fade with waves offers a nice, tight cut. Short on the sides, the low drop skin fade curves around the ear and down the neckline for a sleek trim. The 360 waves will start to get deeper and more defined as you continue to brush. The shape up around the temples and hairline cleans up stray hairs, and women will love the long beard. 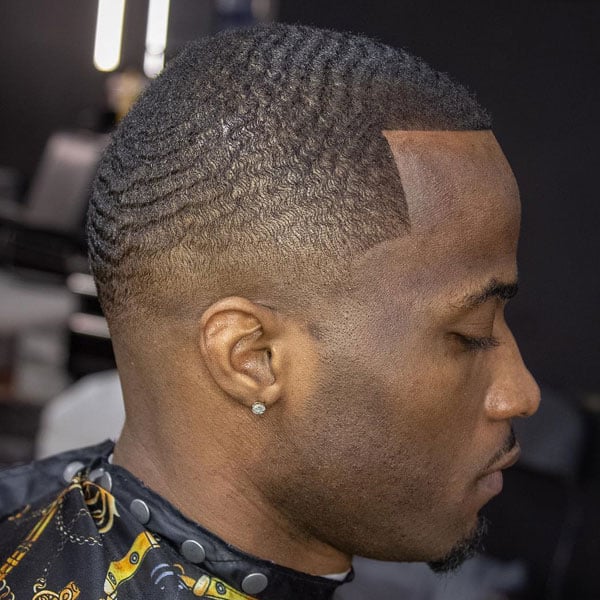 This low fade with waves is the perfect example of how a low haircut can accentuate the pattern created by your deep 360 waves. A low taper fade is great for professional black men. The line up curves along the hairline and down the sides for a clean-cut look. If you’re not into exposing too much scalp, get a low cut with your waves. 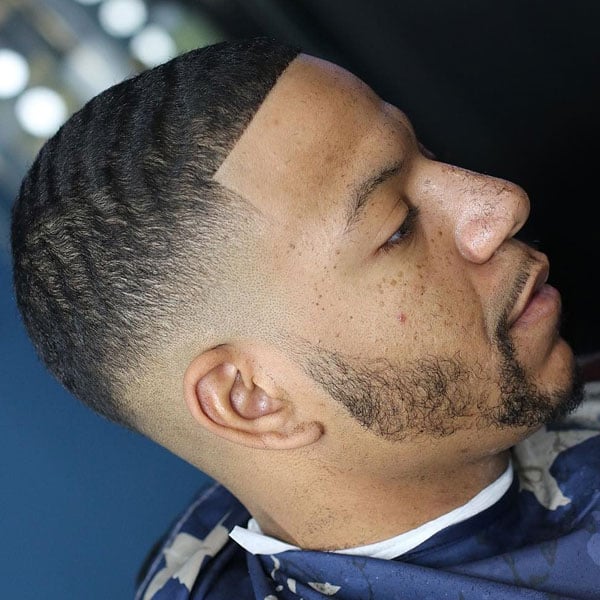 Getting a mid fade with waves can be the perfect balance for some guys. With a mid skin fade on the sides and back and waves that spiral all around, this badass haircut is both classy and handsome. 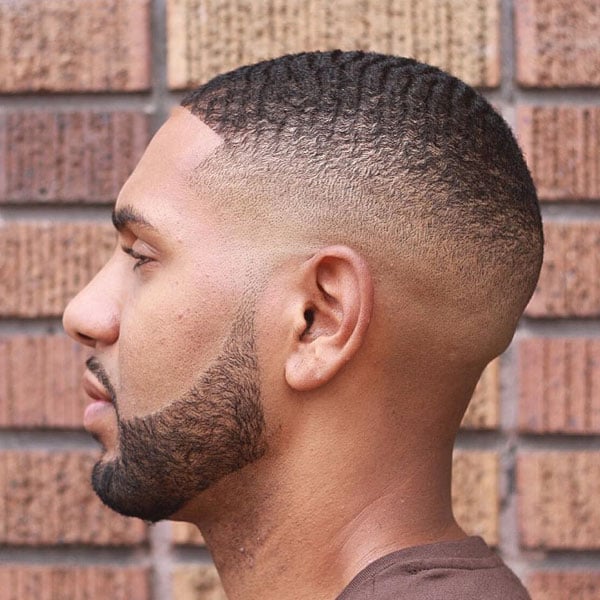 A high fade with waves looks edgy and stylish. The high bald fade starts near the top of the head and quickly tapers down to the skin for a cool cut. For a little less skin, consider a high taper fade haircut that simply gets shorter but leaves very little hair at the bottom. As one of the most popular waves haircuts, everything about this hairstyle is perfect. 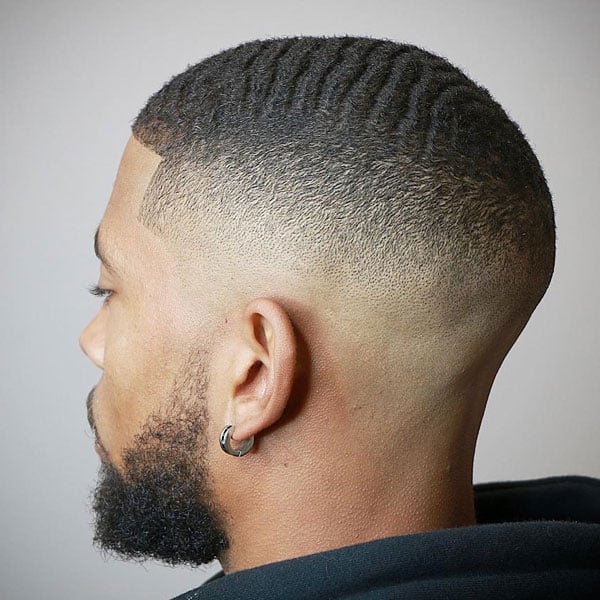 Modern and bold, a bald fade with waves is great if you want a very short haircut. Also known as a skin fade, the bald fade haircut can start high, low or in the middle and will gradually taper down to shaved sides. With short black hair, this 180 waves fade would look chic with a part or design. 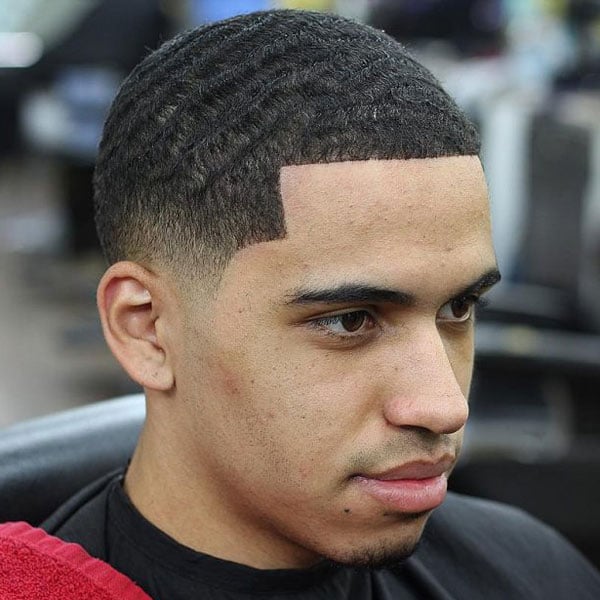 A taper fade with waves is a fashionable black men’s hairstyle. This taper fade haircut comes with an edge up and 360 waves for a fresh style. Whether you’re Black, White or Hispanic, this is the ideal wave pattern to create.

The best 360 waves spiral all around the head with deep, clean ridges. While a clean waves haircut sets the foundation, it’s important to invest in the right hair products. A good wave brush and durag or wave cap can help you get waves fast. However, it can take weeks to get deep 360 waves. Ultimately, the waves hairstyle is achieved with consistent brushing and capping at night. 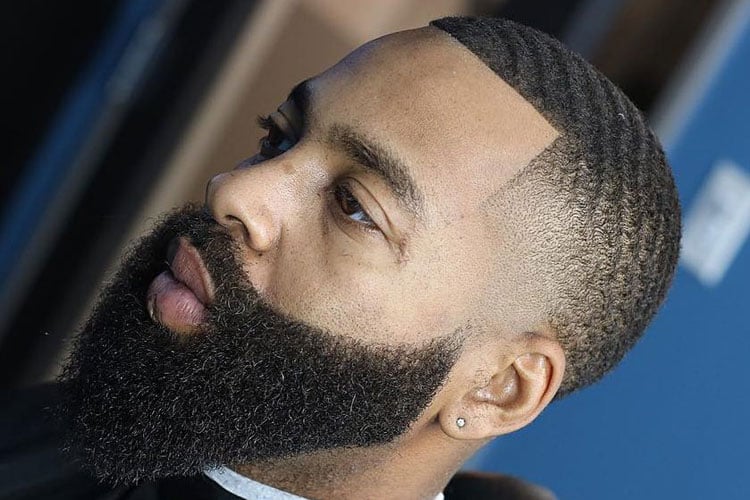 Although most of the different types of wave haircut styles are determined by the kind of fade you get, there are still ways to make your wave cut stand out. From parts to hair designs to deep 360 or 180 waves, here are some unique yet popular waves hairstyles. 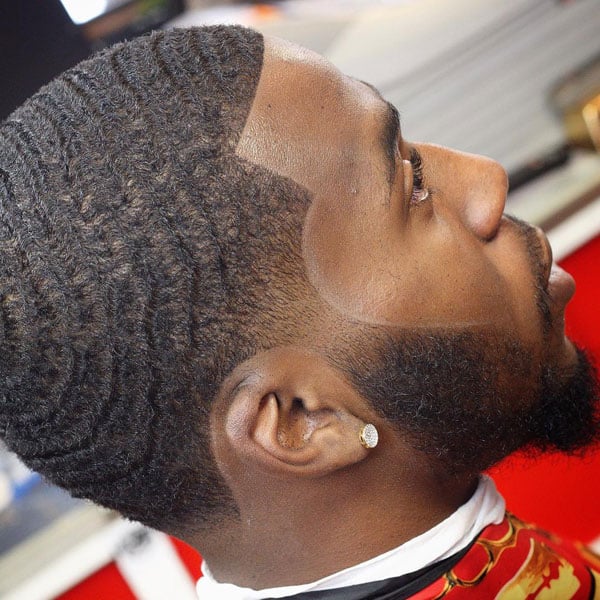 Deep 360 waves take time, dedication and regular brushing. Pictured is a low taper fade haircut with waves and an edge up. Paired with a thick beard, this cut is sexy and hot. Our guide can show you how to get waves this good. 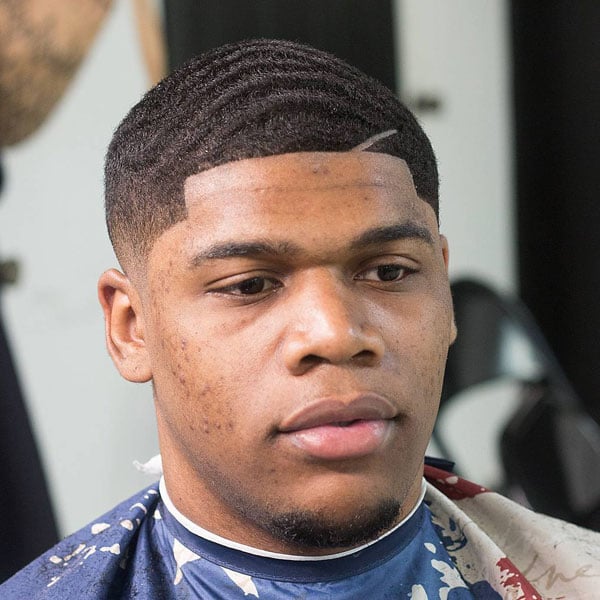 A fade haircut with 360 waves and a part combine to create a very stylish look. The deep waves offer texture on top, and the low taper fade on the sides focuses the eyes to the styling above. The shaved part adds a cool touch and fits well with the wave pattern. 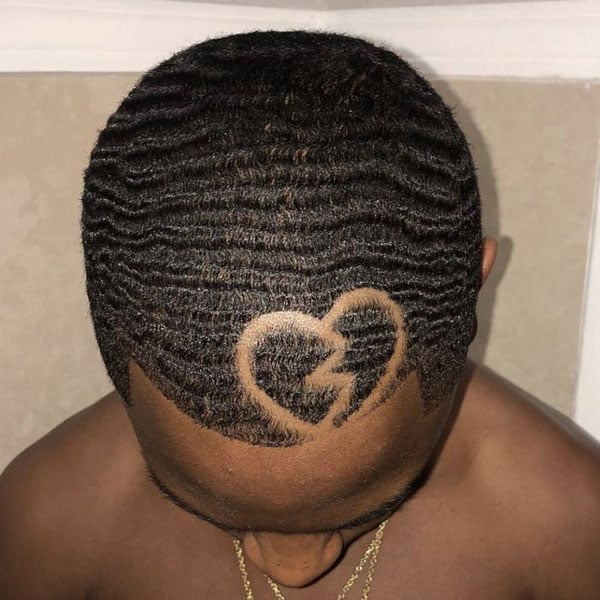 If you want to get creative, there are limitless 360 waves haircut designs to try. Pictured is an awesome heart design shaved into deep 360 waves. However, black men have endless hair design ideas, ranging from shaved lines to zig zags to whatever you want. 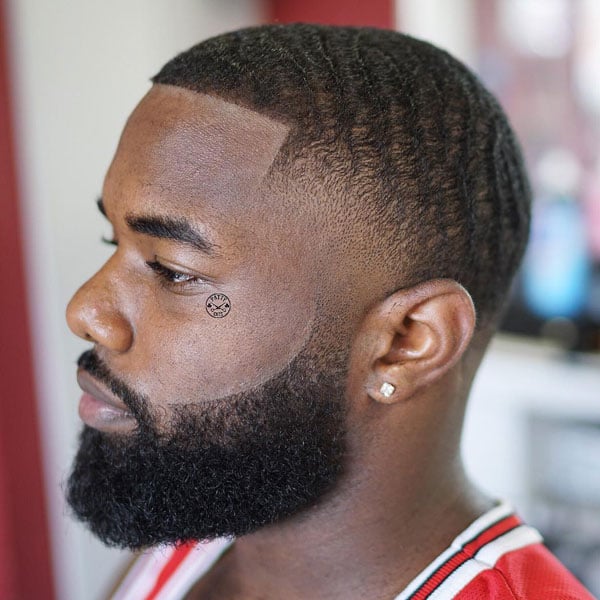 A waves haircut with a beard can be a great pairing. Manly and badass, black men with full beards just look good. Naturally, you’ll want to keep your facial hair clean, groomed and neat. We recommend you get a quality beard shampoo and conditioner as well as beard balm or oil. Get waves and a beard for a flattering style women will notice. 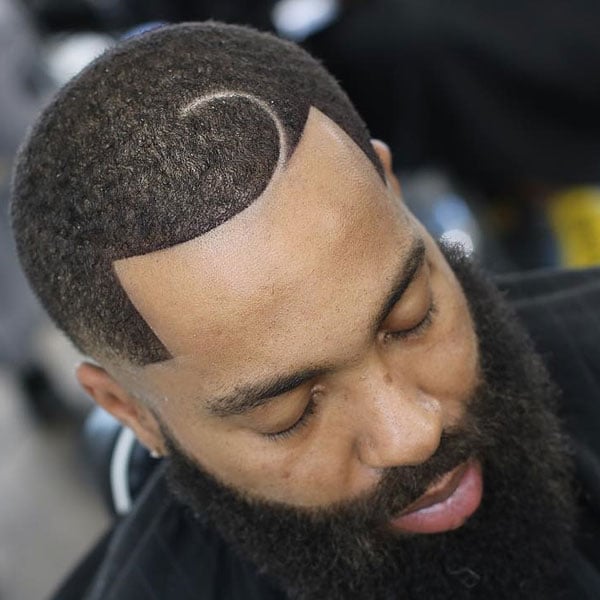 The half moon haircut is a curved part that’s shaved into the top of your hair. Get your wave fade, develop your wave pattern, and then add a half moon part for a new look. 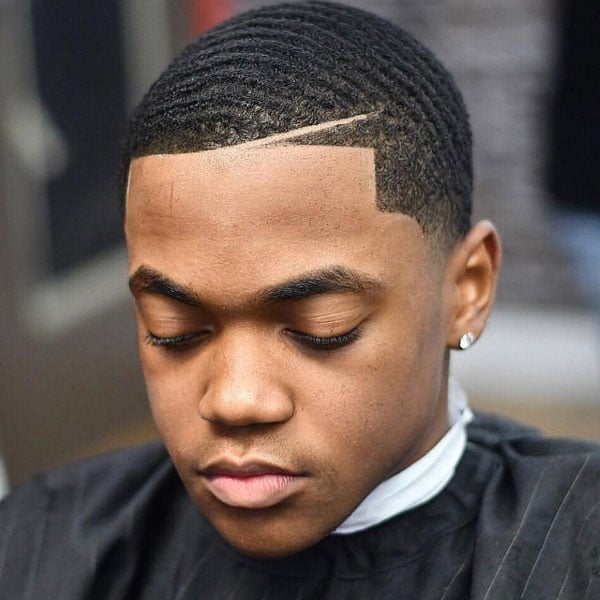 Waves works for black men and boys of all ages. With a low taper fade, line up, and part, this kid’s 360 waves look badass. 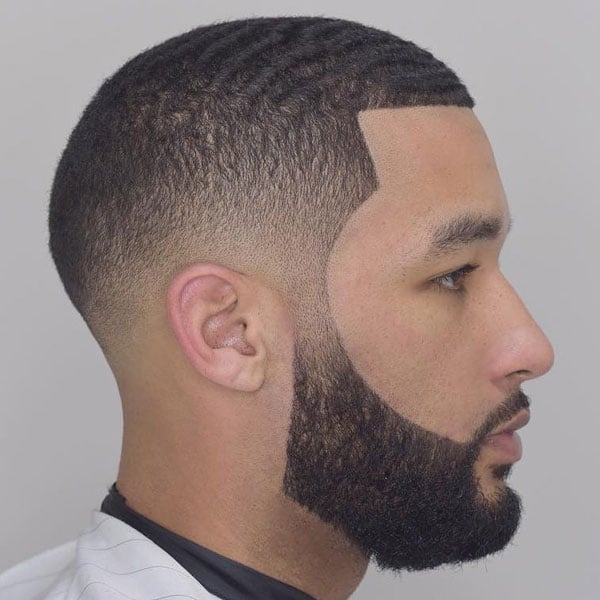 Not all black guys want 360 waves. If you prefer very short hair on the sides and back, then you’ll likely ask your barber for a high bald fade haircut. 180 waves style just as nicely and are actually easier to get and simpler to keep. Talk to your barber about the best way to get a 180 waves fade for your hair. 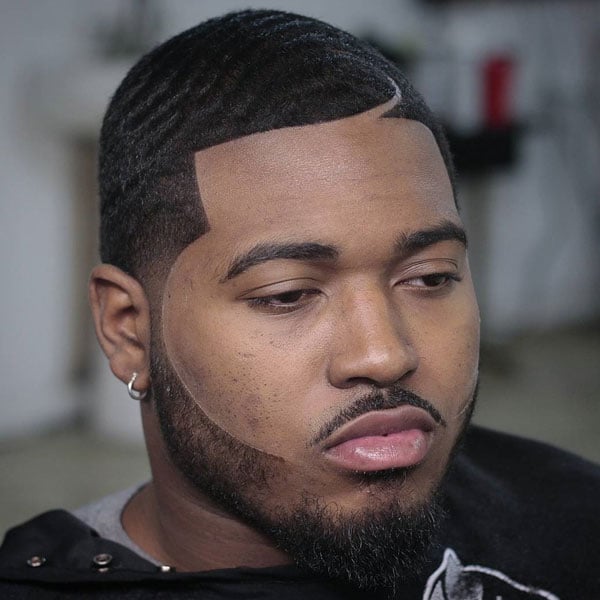 Perfectly trimmed all over, here’s an excellent example of a clean hairline and shape up, thick shaved part in the wave pattern, and a well-groomed beard design.

There are all types of hair waves, so if you’re curious about trying a waves haircut, just pick a cut and show your barber. 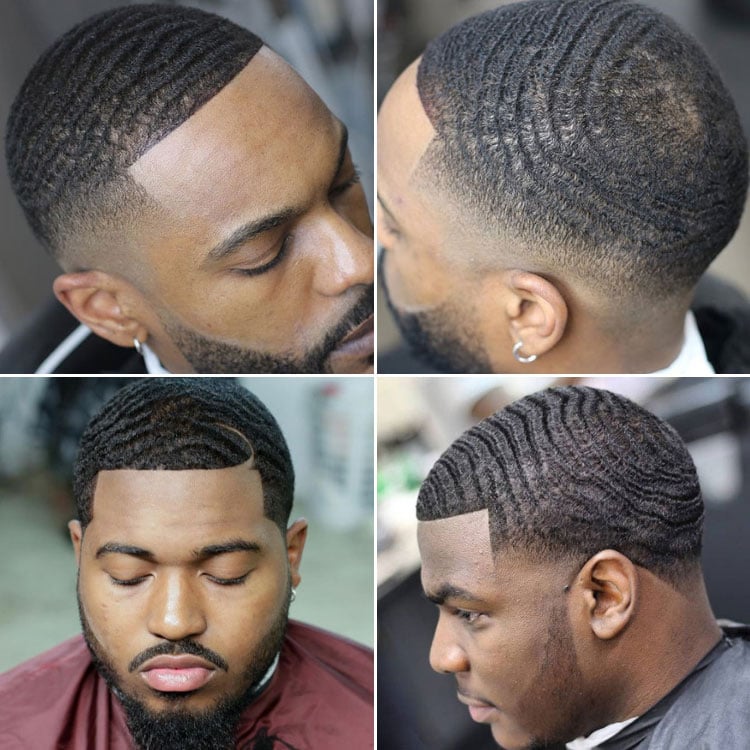