The Ivy League haircut is a stylish combination of the classic crew cut and side part. Also known as the Princeton haircut or Harvard clip, the Ivy League cut starts with a short trim on the sides, back and top, but keeps the fringe hair in front long enough to comb over to the side. This versatile men’s hairstyle is ideal for guys with defined, masculine facial features such as high cheekbones and a strong jawline. Timeless and classy, there are many Ivy League hairstyles to choose from that will look good with a taper, fade or undercut. To inspire your next trip to the barber, here are the best Ivy League haircuts for men to get right now. 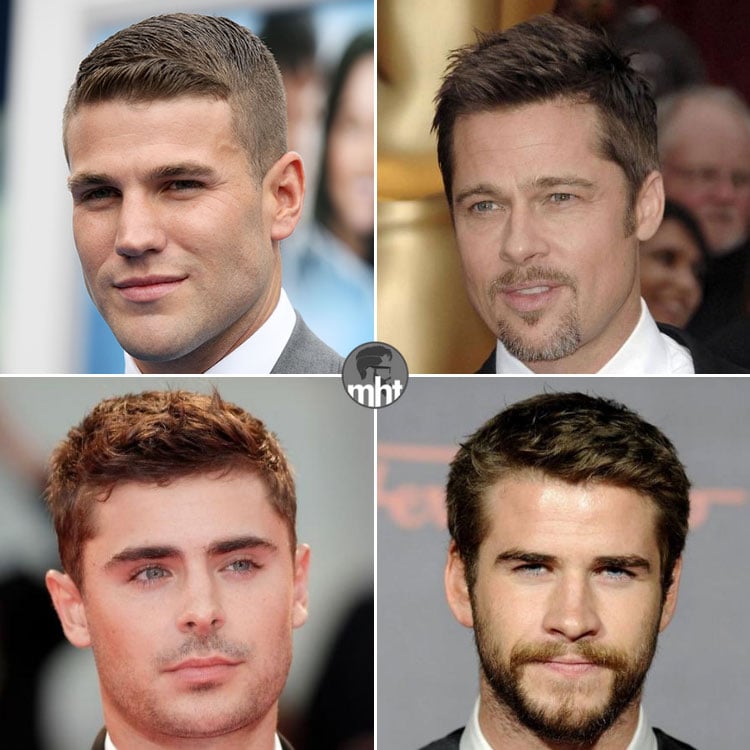 It’s easy to mix up an Ivy League haircut and a crew cut because they are very similar. Interestingly, the Ivy League cut is a type of crew cut but with longer hair in the front so guys can sweep their bangs to the side. Both the Ivy League and crew cut are generally taper faded on the back and sides, but the extra length with the Princeton haircut allows men to style a side part comb over. As a traditional gentleman’s hairstyle, this short cut offers style, volume and fullness that can transform your look. 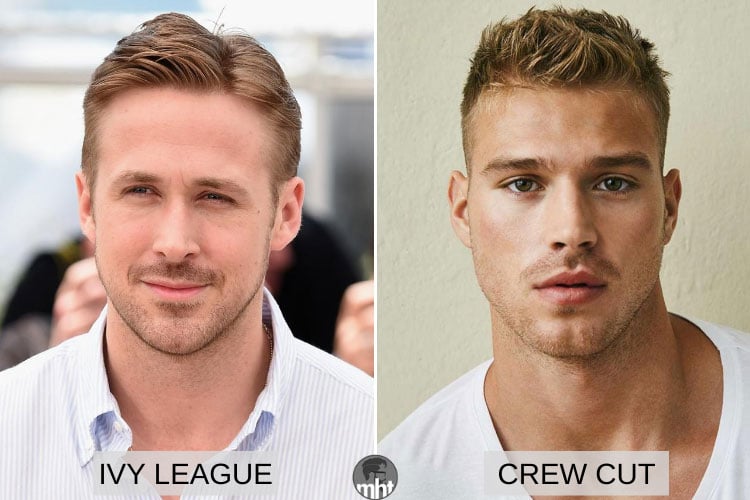 Whether you’re a business professional in need of a smart cut or a college guy who wants an all-around clean-cut style, you’ll want to talk to your barber about getting the Ivy League crew cut. Pair a fade or undercut with long or short hair to achieve one of the best men’s haircuts! 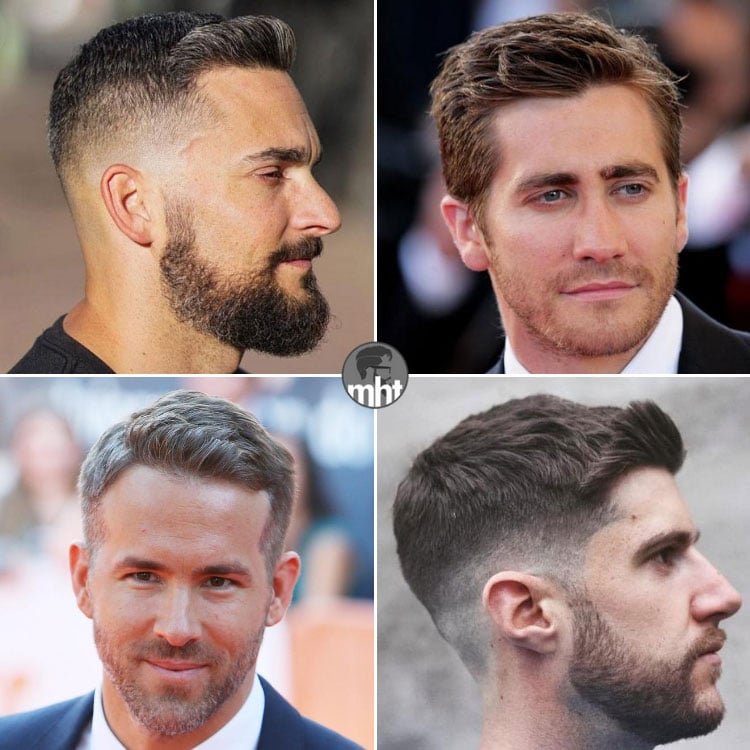 A classic Ivy League haircut utilizes a high taper to section off the top hair from the sides. This allows you to easily add a side parting that can be combed over or swept to the side for a subtly polished style. Traditional Ivy League cuts are synonymous with blonde hair, so you can add highlights if you want an aesthetic with a wow factor. 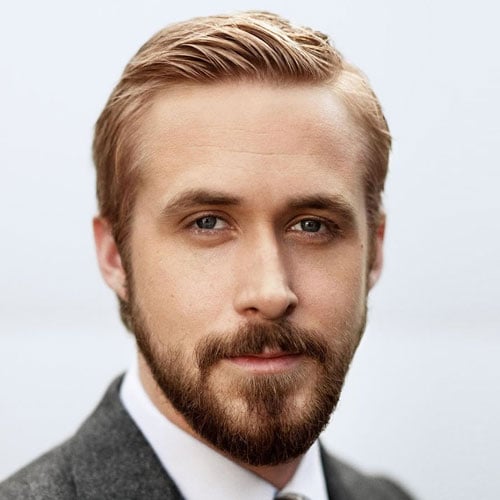 Textured Ivy League haircuts are perfect for men with thick or fine hair as they are versatile. If you’re blessed with luscious locks, you should grow your hair out a bit more and ruffle the midsection with a messy wax or clay. Guys with fine hair want to emphasize the side parting to avoid a limp and lifeless appeal. 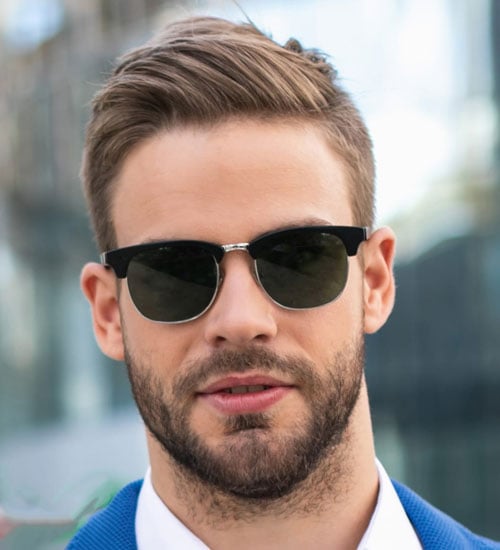 Short Ivy League haircuts are clean-cut and fresh, and they involve little to no maintenance due to their length. However, you need to be careful as a short Ivy League look is almost identical to a crew cut. To eliminate any confusion, you must maximize a part and comb the top hair to the side. Also, you can opt for a longer taper on the sides or even a medium to short undercut. Don’t forget that stubble offsets this hairstyle perfectly as it adds extra texture. 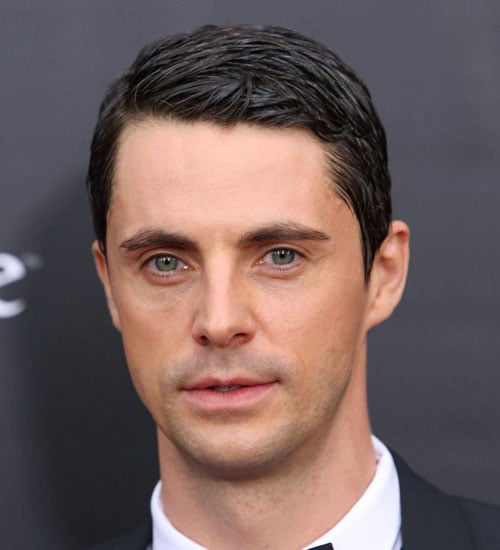 A medium Ivy League haircut requires at least an inch to an inch and a half of hair at the front and in the middle of your head. That way, you can still style it accordingly while ensuring your look appears thick and full of volume. To switch things up, you can coif your fringe up and to the side so that there is a subtle contrast that accentuates your handsome facial features. 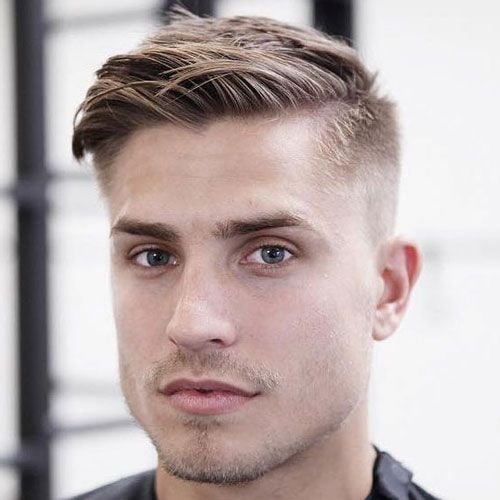 The long Ivy League haircut is a trendy and versatile version that allows guys to style different hairstyles with longer hair. Straight away, people will notice your thick cut that’s almost layered when it’s combed over. Plus, this aesthetic doesn’t get stale as quickly as the others since the long hair on top lets you experiment with different styles, such as swapping a comb over fade for a textured modern quiff. However, longer hairstyles do require more haircuts, maintenance and styling. 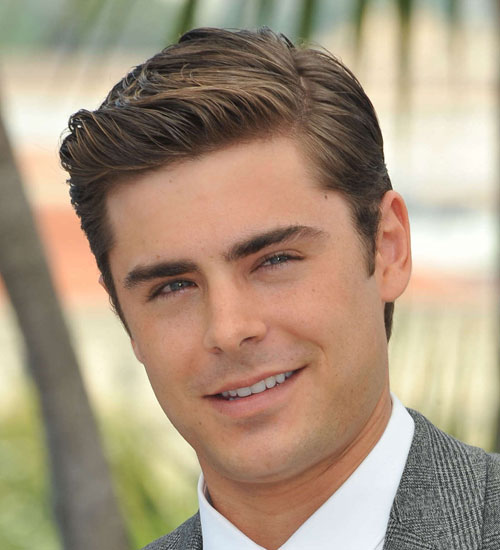 A modern Ivy League haircut uses the main components of a classic cut, yet it tweaks them for an effortless cut that is relaxed and laid back. The key is to leave your hair longer on top with a similar taper on the sides so that the cut has more height and volume. Rather than a hard part, you need a soft part that’s surrounded by a messy midsection to incorporate texture. Also, the fringe should be brushed upwards to avoid a clean-cut look. 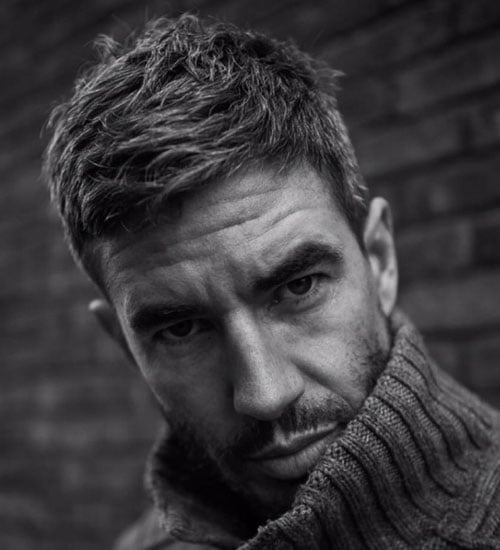 An Ivy League cut with a fade is a stylish way to maintain the trend while adding a modern twist. The short mid-level fade is an excellent way to ensure there is a clear contrast between the different sections of your hair, while the front and middle parts are flexible due to the extra length. Rather than sweeping to the side, you should push the hair forward and plump up your fringe for a flowing style that’s neat and tidy. 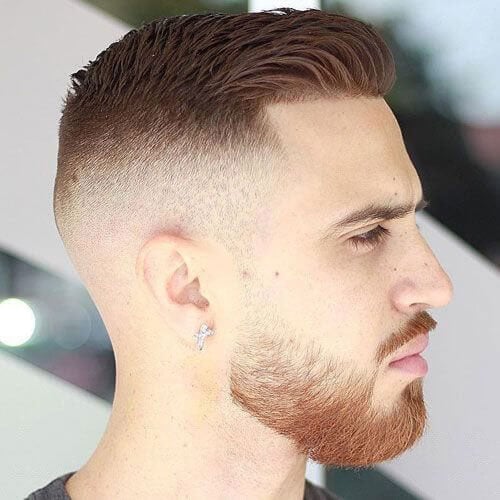 A side part Ivy League haircut requires guys to style a hard part and create a more prominent line in the hair on top. When parting your hair to one side, you can style a soft part similar to a comb over or design a defined cut that instantly stands out. Plus, the parting complements longer sides, meaning you can use an undercut rather than a taper or fade. For an eye-catching part, you need to wet your hair and brush it back before applying a fine comb to achieve a clean hard side part. 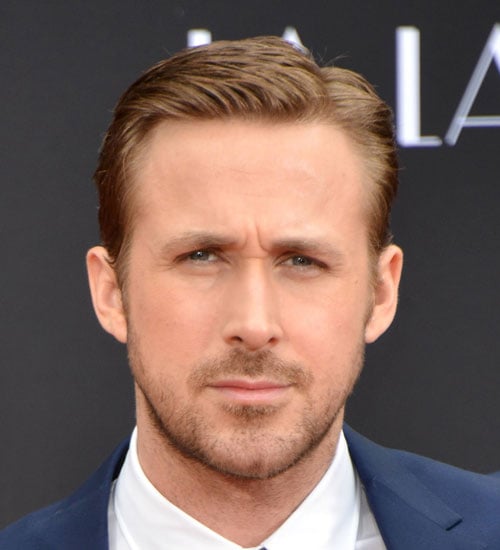 An Ivy League with an undercut is a fantastic style that makes you appear more youthful. For a modern trend that’s on point, you can combine long top hair with a medium to long undercut on the sides. Guys that want an edgy appeal should consider a disconnected undercut. 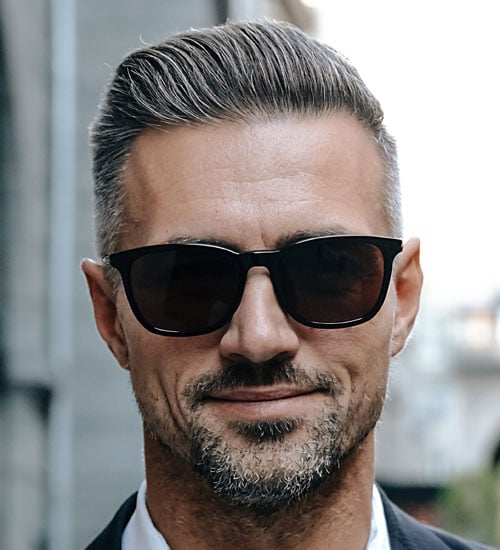 John F. Kennedy styled the iconic Ivy League hairstyle as President of the United States. The JFK haircut features a classic taper on the sides and back with thick, longer hair on top. Textured and flowing, JFK’s hairstyle has always been characterized as youthful and sophisticated, epitomizing the perfect pretty boy look espoused by many young men at Harvard, Princeton and Yale. Whether you’re attending a themed party or want to adopt this style as your everyday look, guys can’t go wrong with this clean-cut hairstyle if you use a quality hair product. 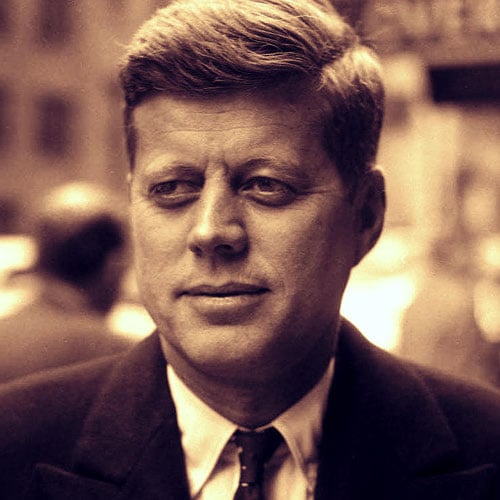 An Ivy League hairstyle is a flattering way to show off your natural curls. As always, you need tapered sides and longer hair on top, but you should choose the length based on your tresses. Men with tight, bouncy curls will prefer more hair at the front and in the middle as it utilizes your texturized kinks. Guys with waves should keep it shorter as your hair is straighter and not as easily discernible. 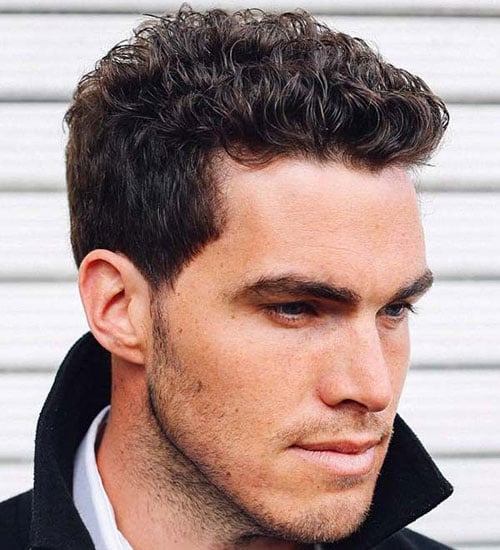 There are soft parts, defined parts, and an Ivy League haircut with a hard part. Unlike the other variations of this style, a part is shaved into your hairline as the side of your head, causing a more disconnected vibe. It’s a great choice for men with flat hair as it lets you group the strands more easily and prevents the cut from falling flat. 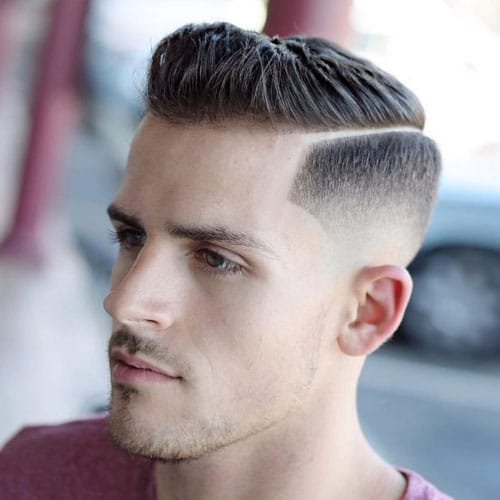 A messy Ivy League haircut is for the men that don’t care for the polished, dinner party aesthetic. Instead, you prefer an effortless appeal that’s messy and relaxed without being wild. After growing your hair out on top and shortening on the sides, it’s best to use putty or clay for the perfect texture before finishing it off with a light application of hairspray. 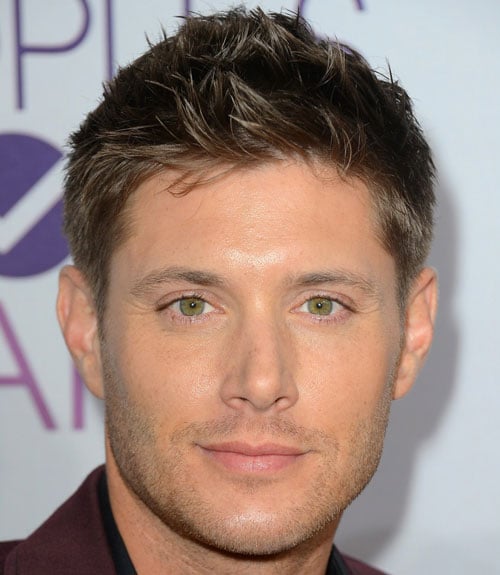 Most Asian men are blessed with thick straight hair, which gives you lots of flexibility concerning your hairstyle. However, an Asian Ivy League haircut is an excellent option as your smooth hair is a perfect partner for the preppy style that is popular with colleges around the United States. Guys should just avoid going overboard with the hair product. Thick hair is tricky to part since it can look greasy, so start with a small amount of pomade, wax, or clay. 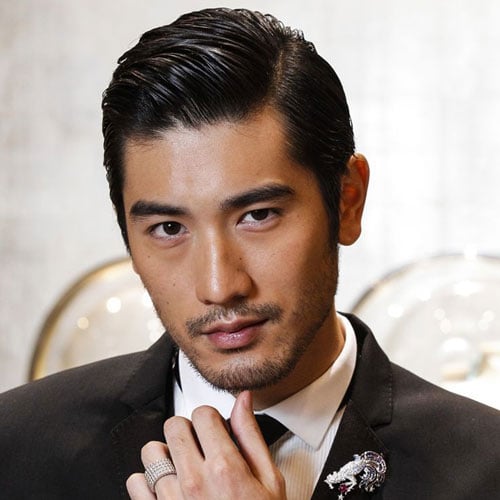 An Ivy League haircut for a receding hairline is a smart way to cover up gaps in your fringe or front of your hair. The trick is to place the part at the side of your hairline that is fullest and then comb your hair over to the other side. As per usual, men with receding hair should keep everything short and neat. 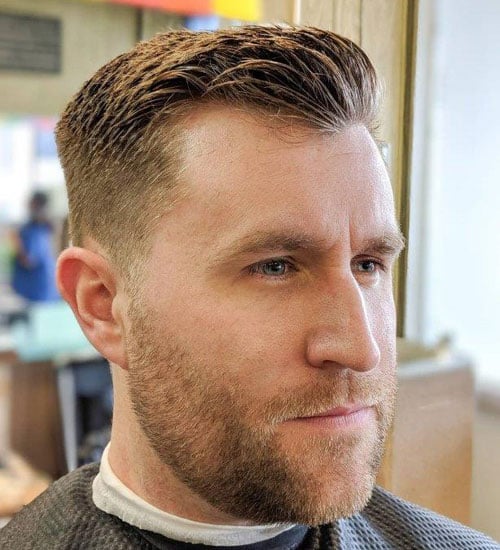 The Right Face Shape For The Ivy League Haircut

An Ivy League haircut can lengthen your face and stop it from appearing too round or square. Think Leonardo DiCaprio, who uses side swept bangs to complement his round features. Combined with a taper fade or undercut on the back and sides with thick longer hair on top, guys can style all the most popular short haircuts throughout the week. 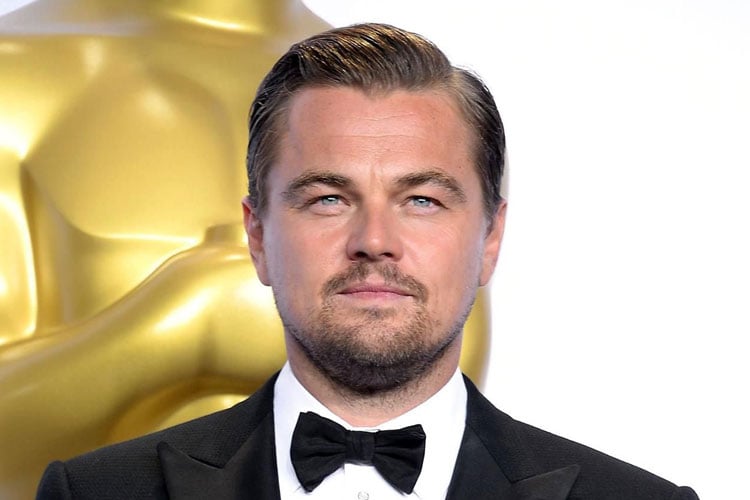 How To Ask For An Ivy League Haircut

Asking for an Ivy League haircut requires communicating with your barber effectively. Some guys prefer to show a picture of the hairstyle they want to achieve, while others easily describe the cuts, styles and lengths they want. Your barber should use clippers on the sides and back, and scissors to cut the right length on top. 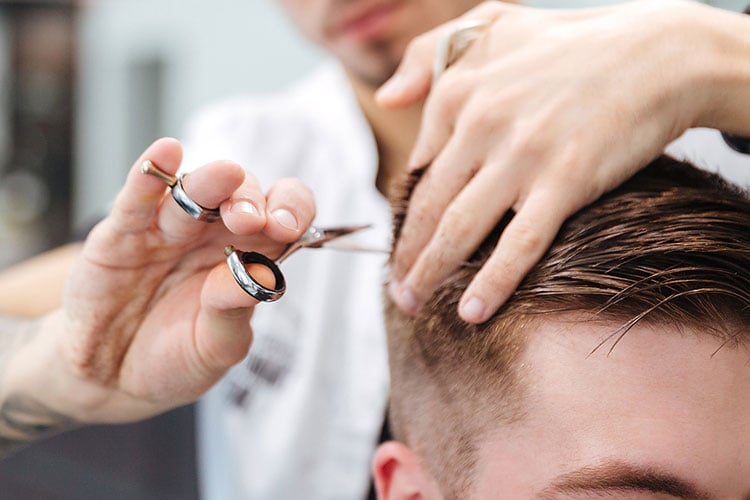 Start by telling your barber that you want a longer crew cut with a fade or undercut on the sides. You’ll need to decide whether you want a high, mid or low fade and whether you want it tapered or blended into the skin for a bald fade haircut.

For the hair on top, you can leave 1 to 2 inches all over the head, but the length in front should be slightly longer to accommodate the side swept hairstyle. For instance, you can ask for an inch in the front for a short cut, 2 inches on the bangs for a medium length style, or 3 inches on the fringe for a long part. 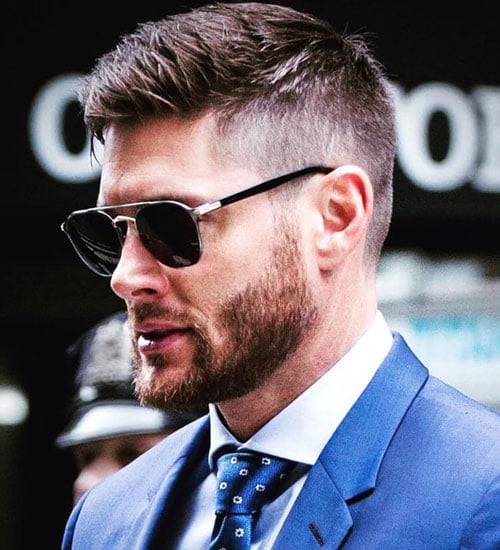 To style the Ivy League hairstyle, use a quality hair product with a medium to strong hold and a low shine or matte finish. The hold will give it some volume and flow, while the textured look offers a natural fullness. 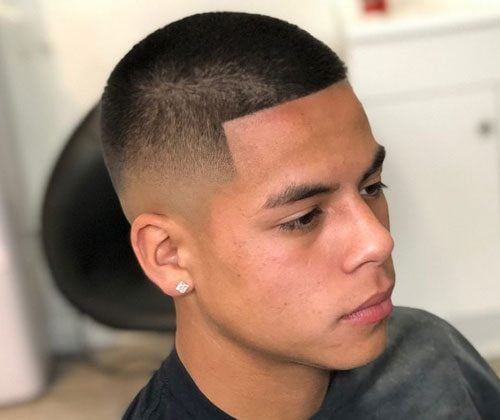 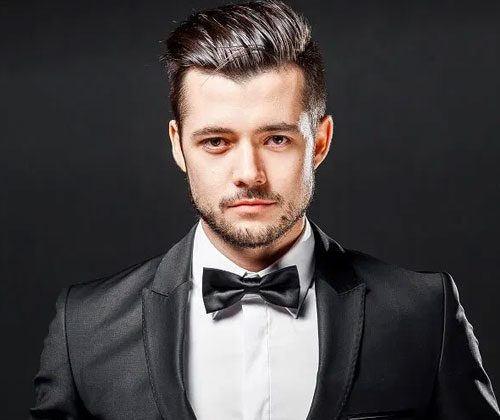 Hair Tonic: What Is It and How To Use This Hair Product For Men 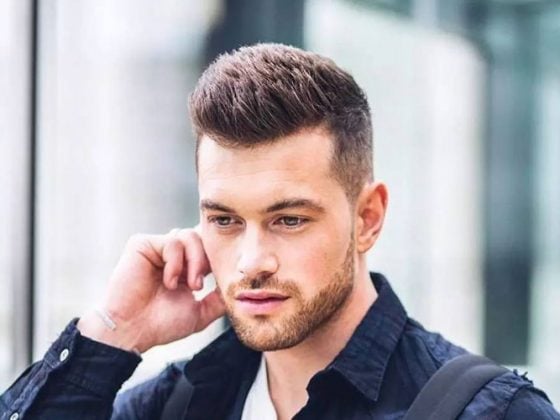 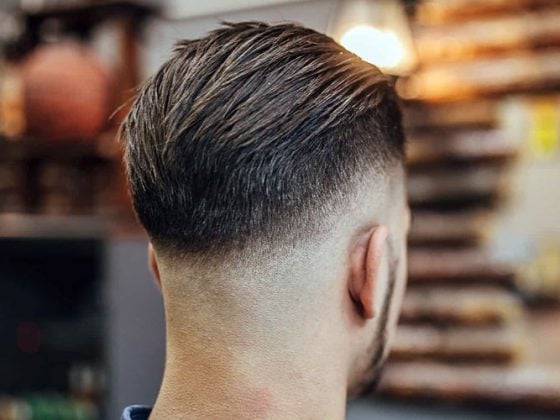 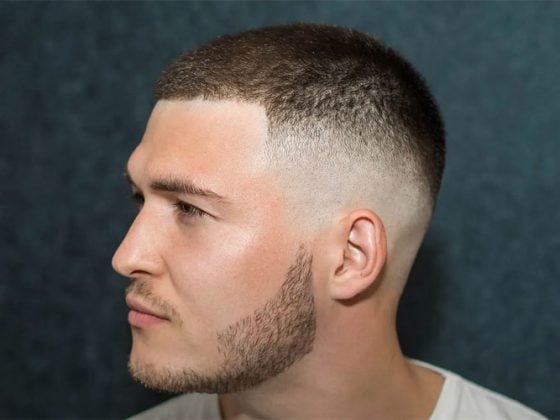 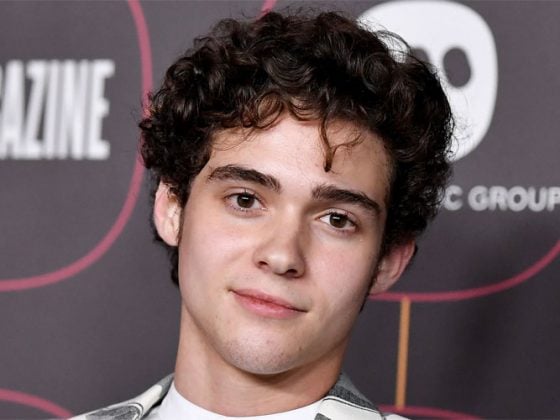 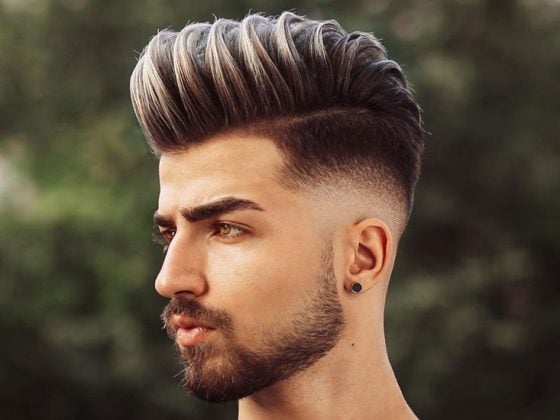 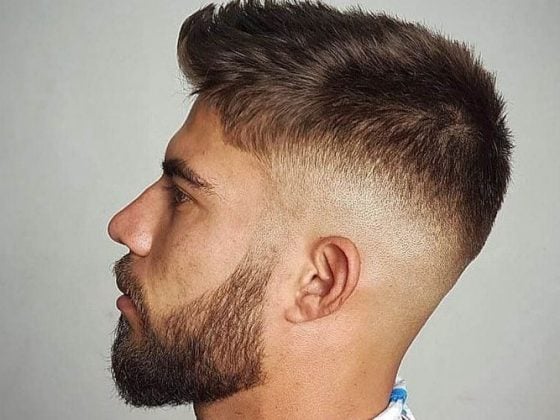 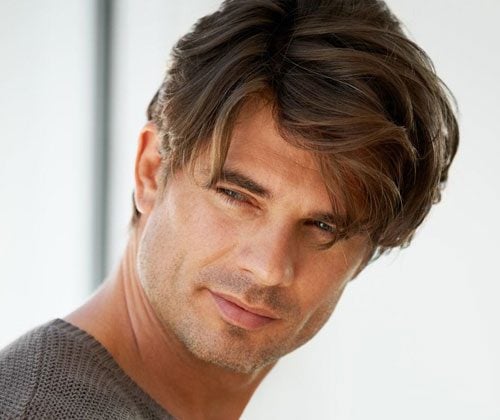